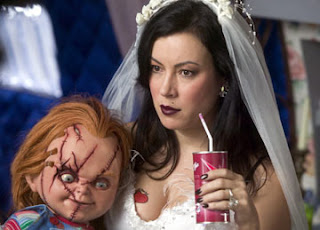 "Seed of Chucky" is by far the best of all the Chucky's.
Why? It's the tale of Chucky's son who is really cute, evil, and a hemaphrodite with an english accent for no reason.Adding in a slanted critique on Hollywood the movie also stars Redman as a rapper who suddenly becomes a filmmaker with really stoney baloney ideas for movies that are sure to become hits. Plus there is a great cameo by John Waters as a paprazzi photographer who gets killed in his darkroom. Of course. Amazing. Oh! and the credits begin with the impregnation process. I told everyone I know to go see it. Not too many people did. They we're all hyped up on "The Life Aquatic" which I don't get at all.

On a whim, my friend and I went to get our tarot cards read in the valley. When it was time for my reading they called my name "Jennifer". As I walked to the counter so did another woman, "Jennifer".....Jennifer Tilly (BRIDE OF CHUCKY/ BOUND/ REMOTE CONTROL/ HEADS etc) Since both of us had signed up for readings at 4pm I had to discuss with her who would go first and with which psychic. The whole time I was bottling up a strong brew of hysterical laughter as the image of her as a rocket scientist in MOVING VIOLATIONS popped into my head. I loved that character.
She knew I recognized her, but I seriously can't think of any other actor in Hollywood I would rather possibly fight over a psychic reading with. She rules!!! ( even though she was dressed in a floral moo-moo and a blossom hat. )

( a scene from MOVING VIOLATIONS )