GETTING READY FOR TRAFALGAR SQUARE FESTIVAL 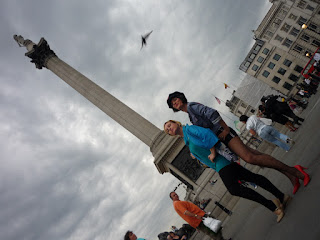 Currently Im in London working with and photographing the lovely Francesca Baglione (Miss High Leg Kick) as she produces an epic theatrical fashion show commissioned by the British Arts Council for the Trafalgar Square Festival. As I was checking in at LAX, I caught a group of Japanese girls laughing at me for wearing a Sushi Chef's kimono. I laughed back because it knew it was the equivalent of seeing a Japanese girl in an In & Out Burger Apron. Suddenl y I found it strange that Im being flown to London to put on a fashion show. To make matters more hilarious, the airline lost my luggage and I was stuck wearing that kimono for 3 days. Upon arrival, Miss High Leg Kick and I went straight to Trafalgar Square to start working on a film that will play during the show. I was sufferring from extreme jet lag but laughter and food are always the best rememdies and so is faling asleep midsentence.
For the next month we will be filming, rehearsing, and putting together costumes for the big show. The most exciting of which will the the construction of a catwalk which will extend from the National Gallery up to Nelson's column. From Monday August 18-Aug21 Trafalgar Square will be roped off and belong to us so that we can deliver hope and humor to the people come August 21.
Here is a link to information on the show: http://www.london.gov.uk/trafalgarsquare/events/tsf/week3.jsp 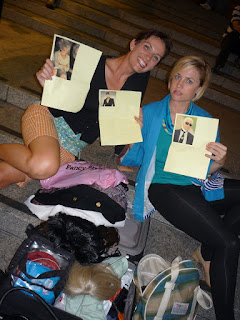 Posted by Jennifer Juniper Stratford at Sunday, August 03, 2008 No comments: