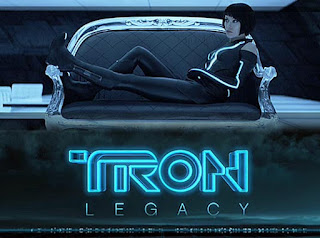 TRON LEGACY blows harder than The Phantom Menace. Commercial directors should not be allowed to touch classic films. At least George Lucas ruined his own mythos. Joseph Kosinski would have been better off doing a fashion spread based on TRON. What disappointed me most, wasn't the fact that they ditched the character TRON altogether-it was that the new lightcycles drive like cars from the Fast and Furious. Meaning they no longer turn on 90degree angle but instead glide and spin out with a tire screech and halt for a product placement shot. Why? This is Tron. We're inside a program after all. Please don't let these folks near Logan's Run.

It pains me to accept it, but I was disappointed, too. I liked the music, but it didn't make up for the fact that I couldn't tell why anyone was doing what they were doing, beyond the obvious.

I'll disagree on the Quorra character, though. I didn't see her as a woman-child but rather as someone who was genuinely fascinated by knowledge of the outside world. I promise (at risk of protesting too much) that my defense of her has nothing to do with her haircut.

I haven't seen the movie yet, but from what I'm reading, Daft Punk kind of did their own boring pop thing, totally disregarding the masterful work of Wendy Carlos. I'll see the movie, sure.. but come on.

Wow, I loved the look, style and sound of TRON: LEGACY.

I thought the story was weak and preposterous at the climax -- but I feel that way about the original TRON, too!

I still love both films for being technically and visually creative.

But you're right about the Disposable Sidekick Girl. They also had an Evil, Treacherous Fop played unironically by Michael Sheen.