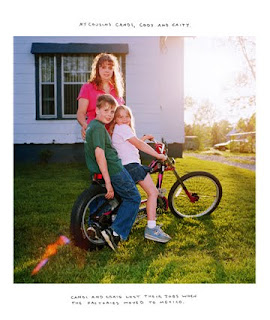 Chris Verene’s new book and series “Family,” published in 2009 by Twin Palms Publishers, is the sequel to his critically acclaimed monograph about his birthplace, Galesburg, Illinois, where his family has lived for three generations. Galesburg is a central Illinois town that has fallen on hard times, much like other small towns across the United States. This series conveys his bittersweet fondness for the now decaying community in which he grew up, which still holds lessons about aging, disability, unemployment, alcoholism and other difficulties.
Verene has been photographing his family and friends since 1984 and has committed to this project for the duration of his life. “The key to my artwork,“ Verene has written, “is that it can only be born out of real and deep friendships and bonds with the people in the pictures.” Each image, whether it is of his family at Christmas breakfast, or of a rundown trailer of two of his friends, is accompanied by a hand-written, sincere text, giving the viewer an insight into Verene’s relationship to his subjects.
For more on Chis Verene: http://www.chrisverene.com/

I made it to the show on Sat. I guess he's going to be back in a few weeks for some chat or something. Let's Go!

Yesssss!! I was just thinking I'm dying to hear him talk about his work!