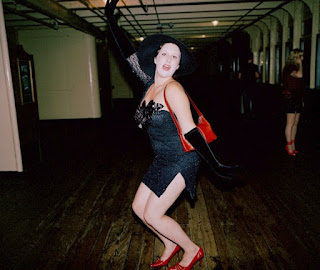 Two new series of work, "Non-Stop Picture Show" and "Shadowplay" are now up on my site for viewing. One night last summer, I went to see The Rocky Horror Picture Show because a friend of ours had never seen it. I was sitting in the audience with my camera around my neck when one of the staff, approached me and said, "Well, aren't you going to take any photographs?" To which I replied, "Is it OK to use a flash?"
At the end of the film, someone in the cast grabbed me and told me they we're going to do a production of SHOCK TREATMENT and wondered if I might want to photograph it. I freaked out. I was never a huge fan of Rocky Horror, however I did go through a phase where I watched SHOCK TREATMENT (the sequel(equal) to Rocky Horror) every night. I know every word to every song in that movie. It was a big secret. Now I finally have a reason and the strength to admit it. Embarrassing as it is, the following week I I was running around photographing the cast. At the end of the evening, as I was congratulating the man who played Farley, he mentioned to me they we're going to be doing a production of John Water's CRY BABY. At this point I realized how important it was for me, not only as a photographer but as a life long movie lover, to represent those who felt compelled to orchestrate a shadowplay. Let's just be thankful I didn't join the production.